Find God in all things, even the Times Square Ferris wheel

From August 25 to September 12 in New York, a gigantic Ferris wheel occupied the middle of Times Square. Located in the middle of Broadway between West 47th and 48th Streets, the Times Square Wheel was 110 feet high and offered cyclists a 12-minute trip for $ 15 for kids and $ 20 for adults ($ 35 if you wanted to “skip the line”) between noon and midnight each day. Those who could provide proof that they had received a Covid-19 vaccine between August 1 and September 12 could ride for free.

The “pop-up” project was a collaboration between a Brooklyn-based production company, AMPM Entertainment Concepts, and Times Square Alliance, a consortium of local businesses. New York City Mayor Bill de Blasio called the Times Square Wheel a “symbol of recovery” for New York and an attraction that “will add even more energy and excitement to a place that is already synonymous with ‘energy and excitement’.

Three of AmericaO’Hare’s most recent employees, Keara Hanlon, Doug Girardot and Sarah Vincent, made the short trip from Americain the offices of Times Square Wheel.

Three of AmericaJoseph A. O’Hare’s most recent employees, Keara Hanlon, Doug Girardot and Sarah Vincent, made the short trip from Americaat the Times Square Wheel offices on Friday, September 3. Their thoughts and some images from the day are below.

I’ll admit that my immediate reaction to hearing about this attraction was a sardonic laugh. “Free rides for people who get vaccinated while running the wheel. If loads of moral and logical reasoning (not to mention the intensive care units teeming with unvaccinated people) hadn’t convinced someone to get the jab, would a free spin on this monstrosity really do the trick? And what would humanity say if this kind of marketing made job? The circumstances of my young life made me jaded before the hour, I guess.

Arriving in Times Square is an experience of sensory overload. Distracted by the many screens, I am caught in a tourist trap by a man in a brown robe. He demands cash, of which I don’t have any. Ironically, on our pilgrimage to New York’s ode to capitalism, I forgot my wallet at the office. A friend covers the cost of my ticket.

As we get behind the wheel, my expectations remain low. But as the Ferris wheel reaches the peak of its rotation, I let my cynicism fade. Instead of ruminating on Covid-19 or late capitalism, I find myself thinking of Maurice Sendak. Yes, it’s true: youth author and illustrator Maurice Sendak, creator of Where the wild things are. The Ferris wheel brought me back to childhood.

In a 2011 interview with NPR, Sendak said, “There is something that I discover as I get older: I am in love with the world.

It is a particularly difficult time to fall in love with the world. Starting my day browsing the news is the easiest way to feel exhausted before you even get out of bed. Anger, even righteous anger, is a heavy burden to bear. So it is difficult to fall in love with the world. Maybe that’s why it took Maurice Sendak a lot more years of life than I did to figure out how to do it. But little moments like a ride on a silly, gigantic Ferris wheel give me hope that it’s not impossible.

Riding in our little glass cube, I sense an opportunity to court the goodness of the world and find God in all things. I am here with two new friends. There is a pandemic outside but we are alive. The view from above is actually quite beautiful. A lot of things are bad, but not everything.

The view from above is actually quite beautiful. A lot of things are bad, but not everything.

The Ferris wheel, despite its movement, left me indifferent. It’s hard to put this in words, but the truth is the ride felt completely disconnected from the rest of the city and even the rest of Times Square. None of us – not even the staff who worked behind the wheel, it seemed – knew exactly why he was there.

Don’t get me wrong, I enjoy a good ride in an amusement park. (Come to think of it, maybe one of those swings would have been even more fun in the middle of town, even though I shudder at the thought of someone’s basketball slamming in an office window. downtown.) The day we went it was a beautiful day in the last few weeks of summer, still warm enough to make me regret my decision to wear a long sleeve t-shirt. And it was a fun outing with Sarah and Keara, if a little odd in the middle of a workday.

In the end, the experience stuck with my experience of Times Square itself: overwhelming and disappointing at the same time.

Yet as the large metal arms of the wheel swayed up and down, up and down, I watched a landscape of neon signs; men and women dressed in frayed polyester Mickey and Minnie Mouse costumes; seedy gentlemen’s clubs with greasy sidewalks under the shade of their marquees. But none of those things looked at me. 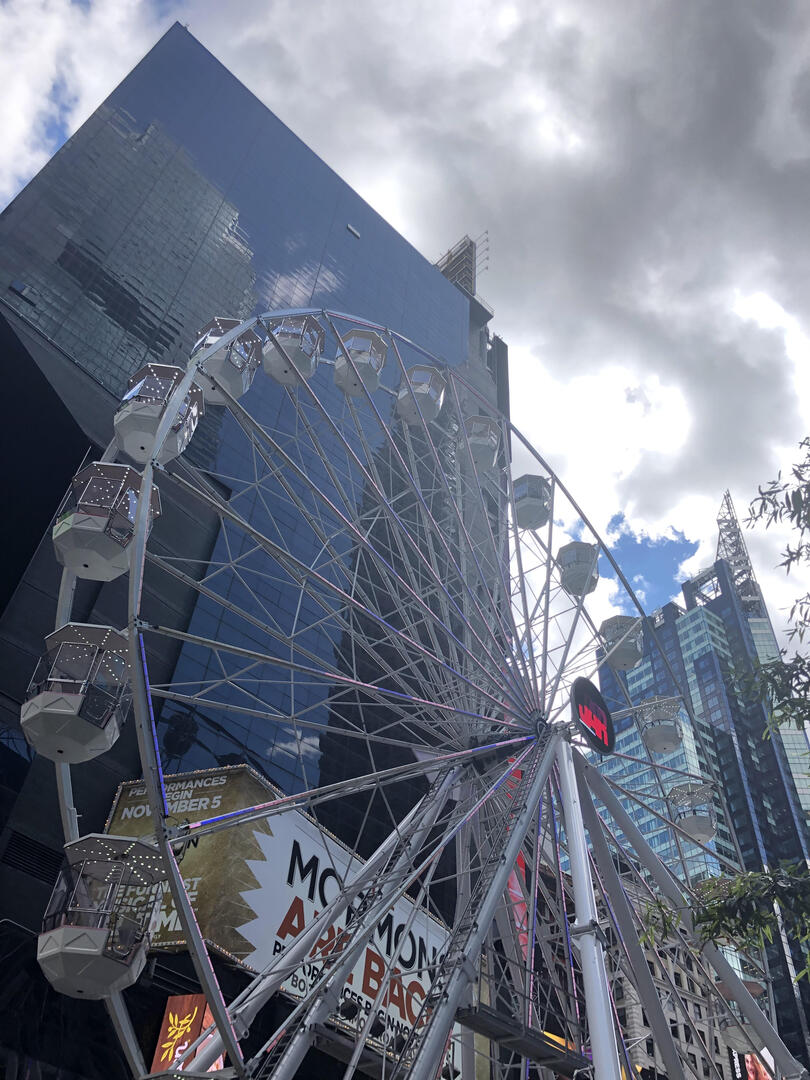 Maybe it’s my lot in life to be the Debbie Downer of every carefree situation – I guess that goes along with the fact that I sometimes correct people’s grammar for sports. Yet I think this one-sided perception of Times Square reflects the way our modern politics treats the average citizen. We are all supposed to look out in the public arena: to pay attention to politics, to find out what those in charge are doing. We are told that our voices matter. But when we entrust our voices to someone who we believe can make a positive difference in our lives, the promises to meet our wants and needs often fall flat.

New Yorkers want to know they won’t be kicked out of their homes just because the pandemic has stifled their income, and the city has a plan to deal with the realities of climate change – a real plan that goes beyond the arrogant presumption that we can isolate ourselves from the wrath of nature with concrete walls.

Instead, we got a Ferris wheel. He goes around in circles, but he never moves.

The ride felt completely disconnected from the rest of the city and even the rest of Times Square.

In Times Square on Friday afternoon, it’s 80 degrees and the weather is nice. The skeptical electronic eyes of blue M&M watch us from above like the modern eyes of Gatsby the magnificentby TJ Eckleburg. A multi-story “PAW Patrol” ad begs us to focus on cute puppies. While munching on two Krispy Kreme donuts, obtained for free upon presentation of proof of vaccination, we gaze at the flashing lights of the mysterious Times Square Ferris wheel. Donut in hand and surrounded by LEDs, it’s incredibly hard not to think of the phrase “bread and circus”.

I actually want to think of almost anything else, but I’m having a hard time settling on anything better. It’s not news that the recent news cycle isn’t doing any good. Revolutionary cases of Covid-19. Floods and fires fueled by a worsening climate crisis. Horror stories from Afghanistan. The anniversary of September 11. And in the middle, a big wheel. As the panem and circenses of the Roman Empire, all the donuts, billboards and rides seem designed to try to entertain us and forget about our material reality, lest we turn our anger on the power structures of the time .

The skeptical electronic eyes of blue M&M watch us from above like the modern eyes of Gatsby the magnificentby TJ Eckleburg.

If this sounds dramatic, that’s because it is. The incongruous figure of the Times Square Ferris wheel encourages such reflections.

Is the wheel misreading the coin? A woefully misplaced optimism? Willful ignorance at best, or intentional avoidance of facts at worst? Its avowed goal was to uplift pandemic spirits (although at $ 20- $ 35 a ticket, its true goal seems clear), but encouraging people to queue during a pandemic seems misguided.

But maybe I’m too cynical, a trait the past two years have only encouraged.

In the end, the experience stuck with my experience of Times Square itself: overwhelming and disappointing at the same time. Donuts are good in a way that makes you toothache to think. The view from the top of the wheel is nice and probably a good photoshoot, if you don’t mind dropping your phone a hundred yards from the asphalt (we risked it all for some footage).

It’s good to be in the sun and with friends. Bread and circuses only worked because people liked them – or at least were distracted by them. And especially during a pandemic, despite the state of the world, maybe we all need some distraction.